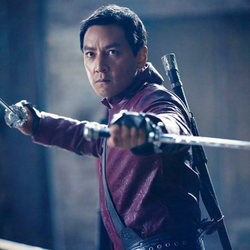 Got #thetantō out today for a photo shoot with @thespeedhunters . Trevor’s pics will be much better than mine but here is a little teaser. Put on the JDM Tanto plate on for the shoot too! #datsun #datsun510 #dime #datsunlife #troyermishracing #toyotires #restomod @carbonsignal_

Another member of the #intothebadlands team is one of our lovely and talented writers @morganicink LaToya Morgan. This was a crazy show to try and create and we couldn’t have done it without our talented team of writers and LaToya wrote many of the badass episodes you have seen over the past two seasons. Checkout her Q&A on @thirdpersonpod podcast on YouTube! @intothebadlandsamc #finalseason

Cressida aka Lorraine Toussaint @lorrainetoussaint Not only does she play a powerful woman she is a powerful woman in real life. The first time I met her I was actually a little scared. Maybe because of her turn in Orange is the New Black, either way she has a very intimidating presence like a regal Lion. Turns out Lorraine a very warm and generous actor and a delight to work with. I loved hearing her speak the Azra language. I never knew what she was saying but it was always mesmerizing. #intothebadlands #finalseason @intothebadlandsamc

@lewistanofficial spotted this one today. I love that poster not because I am on it but it kind of sums up the whole series as well as this final few episodes. We were the first to do this kind show and we will go down go down by our swords. Thanks again for your support and remember to watch March 24th on AMC! Let me know where else you see billboards like this by tagging me and #intothebadlands

Pilgrim aka @babouceesay is new to the cast for season 3 but he fit into the group almost instantly. Having had no martial experience and missing most of fight camp, Babou was worried but the first time he fought, he had our action director @Andy cheng23 literally jumping out of his seat with joy. It’s always joyful when we find an actor that can naturally fight. Just like his voice and his acting he fought with grounded power, like he was channeling the energy from the earth through his feet and out of his fists. His acting is the same. Seemingly effortless but loade...Read more

Mister Dreamy aka Gaius Chau aka @lewistanofficial we were so excited to have Lewis join our cast after his dazzling but underutilized turn in Iron Fist. His father is a stunt coordinator/ stuntman so we having a second generation film martial artist added to the cast was not only a rarity, but a very welcome addition to the gang. Lewis was also a huge fan of the show before joining us so his enthusiasm and eagerness to do all his own stunts was a great boost to our stunt team. I was also excited to have another Asian brother on the show. Represent! ✊Not only is Lewi...Read more

trackday #2 in the #gt3touring Wearing number #17 in honor of @jlin7 and his joining of the @raptors So happy he is on a great team now!

Lydia aka Orla Brady @ladymissbrady has been with us since season 1 but when we made the move to Dublin, Ireland she was our guide and savior because we were on her turf. Even though she did not have to do crazy Kung Fu fighting she was at every fight camp and worked just as hard as everyone else and begged for a fight. She got her big fight in season 2 where we got to see the tough side of Lydia. Although it wasn’t like our other fights, hers was raw, visceral and emotional and was a big turning point for Lydia. She was so amazing in that scene. Still give me chills....Read more