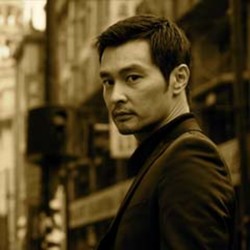 Here is my own portrait, since so many of you is asking to see me draw myself. So I've decided to post my portrait before Conroys. But don't worry, con's will be up next week. I just finished a film in Hong Kong 《回來愛我》 with Flora Chan, It think the scrīpt is pretty good. I had alots fun working with the director Gary Mak. Since "Last Break throgh" a TV series that I did with TVB, I have been getting roles like doctors, professional, designers etc. I guess people starting to accept me playing a average person instead of a villian. Which is a good thing. But sometimes I still miss acting as a baddie in a full action pack film. Andrew

多莉 杜
moustache boy looks great!!! I miss the baddies as well!You are always the most handsome villain in a film
over 12 years ago

I have been working on a few films lately, 《烈日灼人》, 《房车奇遇》. I am still acting and running my Make-up Effects shop and training school.