TRUTH are New Zealand’s heaviest dubstep export and currently celebrating great international success with their big bassline riddims. Their Hong Kong stop this June, 27th is big big news for the blossoming dubstep scene within this city and an event not to be missed this summer. 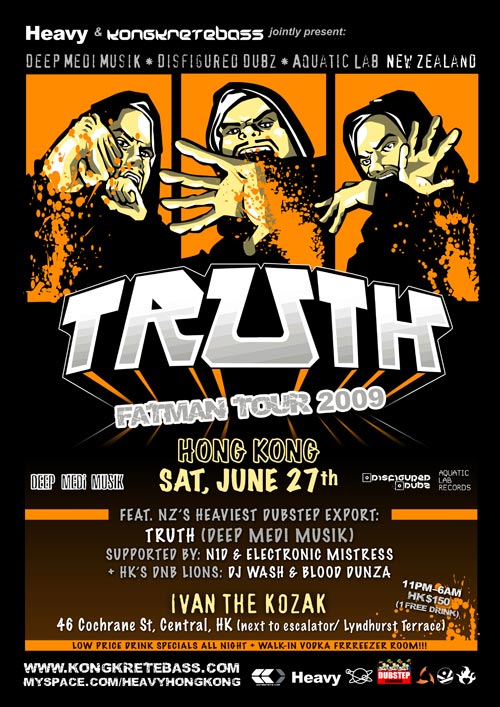 For more information and updates: 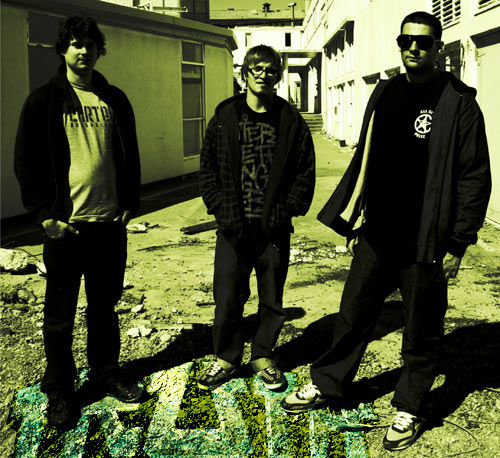 Truth, undoubtedly one of New Zealand’s greatest Dubstep exports; have been making a huge impact around the world with their heavy bassline riddims.

A chance encounter with dubstep visionary Mala (Digital Mystikz) in 2007 inspired the New Zealand trio to try their hand at a new sound. The result was blinding, a style that defies categorization; encompassing an array of melodies, vocals and spacious beats that range from half-step stompers to the deeper profound realms of sound; all with one common element which underpins every track; a heavy bassline riddim that lays sheer force on any system heavy enough to handle it.

Truth’s big riddims have been quickly snatched up by a number of established labels including  Mala’s seminal label ‘Deep Medi Musik’ with the huge 12”, (The Fatman / Stolen Children). Skream has picked up four Truth tunes  (Stay / The Future/ Wednesday / Bubba Ho Step) and will be releasing them as an double vinyl EP 12” featuring for his label ‘Disfigured Dubs’. Australian label Aquatic Lab has just signed two 12″ vinyl releases along with a track for their album. Truth also  have a 12” forthcoming on New Zealand based label  ‘Optimus Gryme Recordings’ (Payback / Optimus Gryme- Immortal- Truth remix).

Truth’s huge dubplates have been receiving vast DJ support from around the globe with artists including; Mala, Skream, Benga, Mary Anne Hobbs, Hijack, Joe Nice, Emalkay, DMZ & Goth Trad to name a few with their beats being dropped at shows from venues as far away as Club Love in New York City to DMZ in London, from Double Happy in NZ to Sonar in Spain, as well as featuring on Radio shows including the world’s number one, ‘Rinse FM’.

Truth are extremely talented DJ’s, holding down one of New Zealand’s biggest international and national event companies. They have been honing their skills for years alongside the worlds best, as well as mixes for radio shows and podcasts, each receiving huge accolades from the lucky listeners, you can be sure their set will be a set to remember!

KONGKRETEBASS & HEAVY – both founded in 2006 – have since, in their own rights, established themselves as prolific underground music promoters and DJs for drum and bass and dubstep genres in Hong Kong’s translient nightlife scene.

KONGKRETEBASS is recognised internationally for producing “Kongkast – Asia’s biggest podcast for drum and bass and dubstep music”, as well as hosting top select DJ showcases in Hong Kong. HEAVY is best known for tirelessly pushing the scene by taking emerging DJ and MC talent under their wing and exposing them to the forefronts of their artist lineup at their many infamous HEAVY events.

KONGKRETEBASS & HEAVY are proud to jointly present the TRUTH to Hong Kong – with a genre that has been exploding in nightlife scenes in all corners of the world from UK, Europe, US, JAPAN, Australia, New Zealand, Russia, China and beyond – the genre is called DUBSTEP.

HELLO! We like Drum &amp; Bass and Dubstep music. We organise parties, we DJ, we write our own music and we run KONGKAST - Asia's largest podcast for these g