I've been writing and editing content for a re-vamp of my website and in doing so, wandering through past projects, I realise what a huge amount of output there has been in my short career as an artist, which officially has only been around 10 years but off the record has been my whole life.

What also came up as I dug around previous paintings, projects and whatever else, is an enormous amount of work that went into projects that never happened. I've actually failed far more than i've succeeded. I guess that's what keeps me hungry and ambitious.

Originally proposed for the Hong Kong Museum of Art. The tiger was to be an installation comprising of a live tiger that would stalk the exhibition rooms of the museum, with it’s movements cleverly restricted by a hidden system. The tiger would never truly be in reach of the audience

The Museum turned the project down due to health and safety concerns (detailed in the 30 page refusal letter, more to do with spread of germs through the aircon than the thing eating someone).

A compromise was proposed by replacing it with a horse. Also turned down for the same reasons.

A further compromise was offered by exhibiting all the parts necessary to make a tiger using skin, bones, etc from dead tigers. Refused on same grounds. 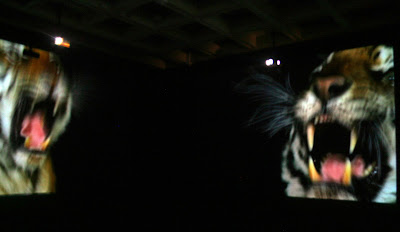 Birch attempted to start a project where vehicles in his possession and of others were given a series of license plates with cryptic words. A new scheme in Hong Kong allowed vehicle owners to choose their own letters and numbers rather than the previous standard 2 letters and 4 random numbers.

Many cars have appeared in the city since then with words such as ‘HAPPY’, ‘BANANA’, ‘SUCCESS’. Etc

All were turned down on the grounds of being offensive. 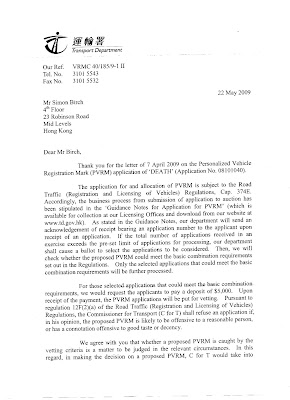 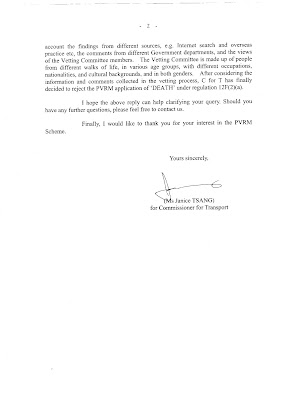 Death in an Italian Car

Birch purchased a 1980 Ferrari Mondial with the intention of driving the car and crashing it at high speed, in the darkness. Hoping to have the car roll numerous times, the car would be prepared with explosives to force a violent end.

The project would have culminated in a multi screen video installation of the vehicle moving through space and being destroyed in super slow motion. The wreckage would have been displayed as sculpture also.

Ferrari were approached to sponsor the project but they were not happy to endorse the destruction of one of their babies! Fair enough. They suggested we get Porsche to sponsor as they would be more than happy to get one more Ferrari off the road...! 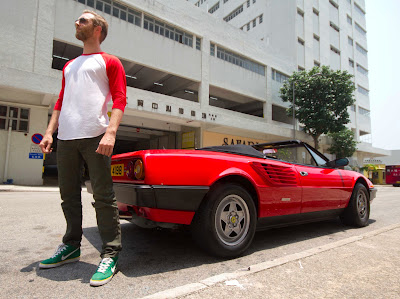 The car, ready for destruction! Authorities refused to allow the crash to happen on public roads and while an alternative was explored, it was discovered that another artist, Dirk Skreber, had already produced a similar installation.

This project will hopefully proceed with some conceptual and presentation re-approach.

A guerilla project worked out in an abandoned building in Yau Tong in Kowloon, Hong Kong. This large old shipping warehouse was to be divided into various installations, 14 rooms over 3 floors. The project discussed British colonial history at the time of the fall of the Qing Dynasty and the formation of Hong Kong itself. The title refers to the 13 factories, a trade district in Guangzhou in the mid 19th century.

The project was developed and a group of enthusiastic volunteers were ready for action as materials were prepared. It was to be installed over a number of days in secret, to be advertised covertly and anonymously.

Sadly, only days before the project was to be initiated, developers tore the building down! Well, being the project was completely illegal we hadn't thought to ask them when the end would come...

The project sleeps until another suitable venue is found. 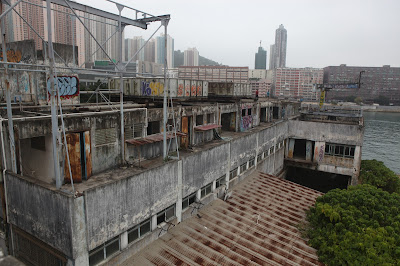 Originally a major part of the Hope and Glory, The Ironman was a film and performance and documentary all in one. A man, Brian Downes of Hawaii, was employed to train for 6 months to compete and finish an Ironman race, consisting of running, cycling and swimming a huge distance. Mr Downes kept a daily video record of his activity and was directed by Birch as he monitored progress. Mr Downes would have then been exhibited at Hope and Glory where he would continue his work by allowing the audience to instruct him to perform physical feats of their choice (sprinting around the show, push ups, etc).

Though the film exists it was sadly cut short, after some months of hard work, as Mr Downes sustained a serious injury while training and almost broke his neck. His race dream sadly came to an end but we are happy to say he has since made a full recovery.

Simon was approached by Nike to build a large art installation at the Beijing 2008 Olympics in the style of his previous projects, with multiple rooms and media. It was to be an art installation of multiple parts that all related to sport. Nike decided not to go ahead with any such art project. 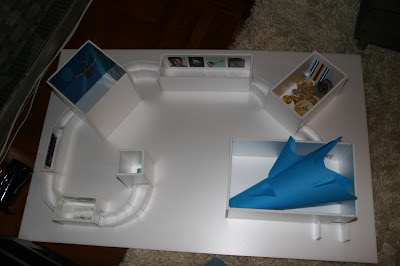 In 2007 Birch planned a group show to combine installation artists from both Japan and China. With so much volatility between the two countries over hundreds of years, such a show could go in many direction. Some artists were expected to collaborate, others to show side by side, all responding to the theme of their complex, intertwined histories.

The project was shelved due to financial restrictions, and no suitable space.

Birch was commissioned by a denim brand to produce a complex multimedia art exhibition that would respond to the brand. Birch collaborated with noted photographer Wing Shya. Birch took large quantities of the brand’s denim and distressed it in most unusual ways. It was laid down entire streets and modified Japanese cars were allowed to race and spin on it’s surface. It was rolled around boulders that were pushed off cliffs. It carpeted the artist’s studio while paint splattered upon it daily. It was hung on city walls where urban artists covered it with graffiti. It was shot at with various guns, even once while the artist wore it over a bullet proof vest. A few more bizarre treatments were shot by Wing, with Birch art directing. The damaged denim was then to be turned into pairs of jeans that could be displayed alongside photo documentation of the process that created them.

Sadly the brand encountered management shake up and budget cuts and the project, with some dozen further treatments, was never completed. 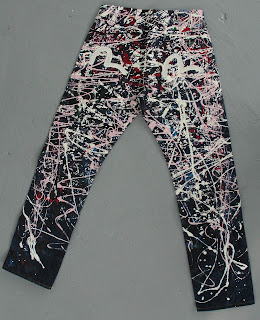 Birch has applied to represent Hong Kong at Venice 3 times over 6 years. The process is one of slow proposal and meetings with the Arts Development Council, a HK government organisation, interestingly with no artists on the board that we met!

First Birch proposed a complex installation project that became 'Azhanti High Lightning', second with a reworking of 'Hope and Glory' (a project that already existed, so easy and cheap and proven!) and lastly with the Parasite project which was then proposed for the Hong Kong Museum of Medical Science. All were rejected, no reason given. A very demoralisng and exhaustive process each time. 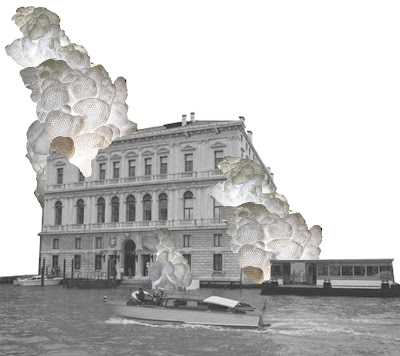 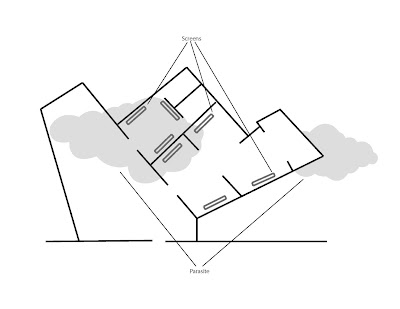 After failing to convince the arts development council to let him produce the Hong Kong pavilion at Venice, Birch proposed to build the temporary structure on the Hong Kong Museum of Medical Science. A much more appropriate venue as the site of a plague outbreak in the 19th century. A bulbous, alien looking organism, it would also appear on other specific buildings around Hong Kong, as if a virus had landed from outer space and was spreading around the city.

Sadly the heritage nature of the site would not allow the lightweight sculpture to be attached, especially in a city beset by regular typhoons. The project has since morphed to become the free standing 'Meteor' project which faces its own hurdles.... 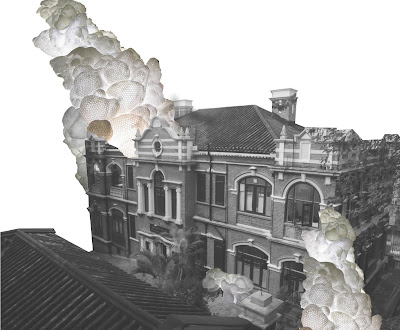 The Meteor is to be a 30,000sq ft, temporary structure, that houses a large, multi-screened video installation. The structure was to be made reality with the generous support of Norman Foster and partners, British architects, who's Hong Kong office took a keen interest on the project.

(The project started life as 'Parasite', mentioned above)

Over a hundred people from allover the world have worked on the project, it has been developed it for over a year. It would have been up for only 6 months and was a non-commercial project.

The project was proposed for the vacant land at West Kowloon, site of the future cultural district project for Hong Kong but, even with the backing of Fosters, was turned down by the West Kowloon Cultural District authority, specifically the team building the M+ modern art museum, and we continue to look for an empty piece of land where it might be built. The interior film continues to be developed.

All we needed was the empty land at West Kowloon for 6 months to make this happen but the government said no.

A large property developer commissioned Birch to propose a number of sculptures and installations to be placed around a new shopping mall development.

A number of concepts were presented including huge handguns made from toys, a large black monolith with embedded screens that showed complex films all shot on the streets of Hong Kong, a hanging star made from a specific type of LED sign making material that showed constant poetic sentences, a walk in infinity mirror environment which allowed the viewer to see themselves from all angles, repeated endlessly into the distance, and many more.

All were rejected as the developer chose a designer who's interior decoration proposal was more 'subtle'. 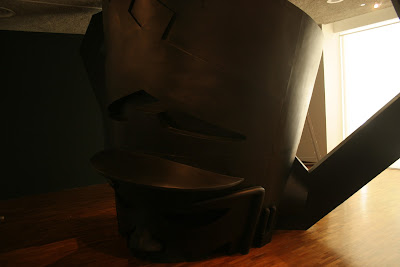 This massive head was one such idea that never made it to the shopping mall but did end up in another installation, Azhanti High Lightning. Hope and Glory LA

Birch was encouraged to go to Los Angeles to work with Black Dog Films, part of Ridley Scott's production empire, to pursue the viability of re-building and re-visiting the Hope and Glory project. Space was found, along with many people who were able to contribute to the project but it just fizzled. Birch spent a month meeting all kinds of people necessary to make the project happen and sourcing locations and resources. Sadly some weeks after this initial burst of energy, Ridley’s brother running things in LA, noted filmmaker Tony Scott, committed suicide. 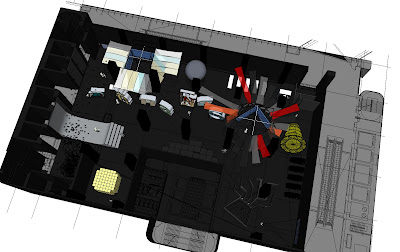 Hope and Glory vs The Government

The original Hope and glory was built in Hong Kong in 2010. It happened at the 20,000sq ft Artistree space in Quarry Bay, generously donated by Swire Properties, a big property developer in HK.

The show was a non-profit project and the huge sculptures, video installations and performances certainly came with a challenging budget. Birch was able to barter his paintings with some contractors to reduce the bill and get favours from loyal supporters.Brands like Diesel and Louis Vuitton also pitched in but the bill still came in at HK$4million for, what is still, the biggest solo art project in HK history. This bill was paid for by Birch and friends (he emptying his credit cards to make it work, and a patron who was a dear friend and an avid collector of Birches work).

This still was not enough so Birch approached the government who were calling for proposals to access a 'Mega Events Fund', millions of dollars put aside to support events that would serve to engage the HK community and create international exposure.

The government pledged HK$2million, a record fo an art project in HK.