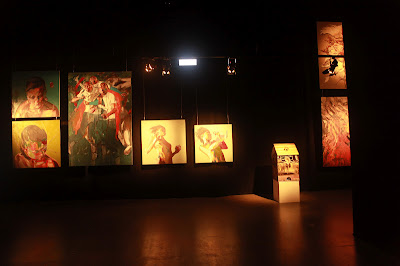 Me and Cyrcle @ Daydreaming With...

I haven't blogged for ages, been far too busy. Here in Hong Kong they say that being busy is a good thing but I think I'd rather have slightly more relaxed pace of life so I had more time to read, write and whatever else. Quality not quantity.

Over the last few months we (me and Laura and Robert and Coco and Leo of Future Industries) have presented the exhibition 'Daydreaming With.....' Over only 3 months we selected, shipped, unpacked and installed the work of 30 artists into the 20,000 sq ft Artistree space in Taikoo. It is the biggest private space for cultural use in HK. It's the same place we held Hope and Glory a couple of years ago. 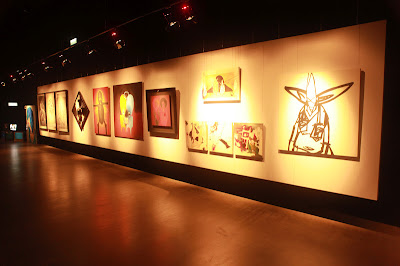 Futura 2000 and Massive Attack's 3D. The show is a wonderful mix of artists from all over the world from very different backgrounds, all connected through myself and co-curator, the wonderful James Lavelle of the band UNKLE, all housed in this dark and massive environment. 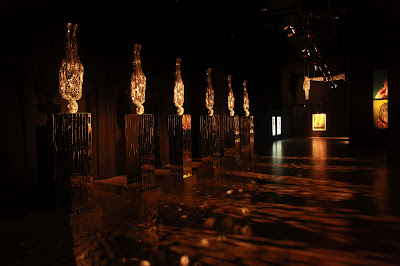 Li Wei It was quite a challenge, as is any art activity in HK outside of the more commercial stuff going on here. There's a lot of attention on HK art scene these days it seems. Sotheby's and Christies, ArtHK and big brand galleries like Gagosian, White Cube and Perrotin, have all been bringing HK much attention by their activity here. Along with the governments continued efforts to get the WKCD up and running with the M+ modern art museum, it seems like HK is rocking. But this commercial and institutional activity is only one part of the cultural landscape and it feels to me there's still a lot missing on a more local level. Hopefully myself and Future Industries can provide part of that missing ingredient. 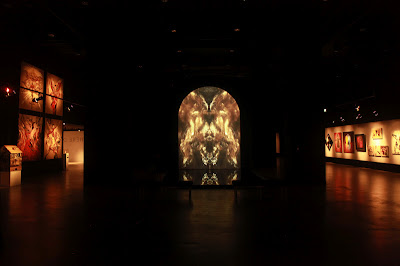 From our experience with Hope and Glory and now DaydreamingWith..,  I can see why there isn't more. After 15 years here it is still a struggle to produce projects that don't bring a financial return. Sponsors don't want to support anything unless there is a clear quantifiable return and they often don't fully understand art and it's potential impact long term. Of course this doesn't stop me and we are lucky to have had at least some support. Swire have let us use their space for the second time (after Hope and Glory they were nervous because of the rather unorthodox nature of that project). But they took the risk and helped finance this project, I'm quite sure it's the most generous support ever of a HK artist's exhibition ever in this town. So that sends a positive message that things are really getting interesting here. You really can make stuff happen here if you are driven enough, there are opportunities if you work hard for it. 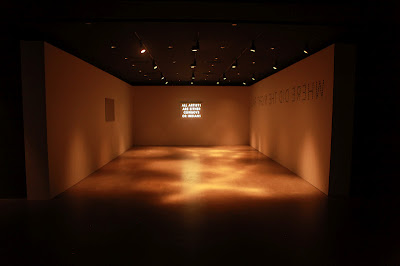 I've never heard of an artist being given the money and the space, over a million dollars, in HK before. Grateful as I am, it wasn't enough money though, so we went to every bank and brand that would see us but we were unsuccessful (much sponsorship went to the art fair so perhaps we missed out). So we filled in the gaps and cut a few of the more costly artists (video installations can be vastly expensive). Originally there were 40 artists, finally there were 30. A little heartbreaking innovation and we got there in the end. 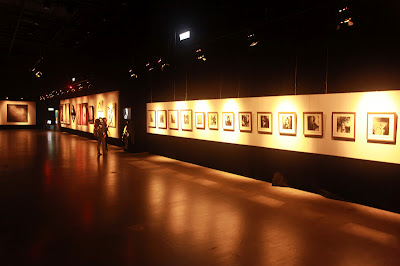 We managed to get the whole thing together though and even with the compromises in content and layout because of budget, we really do have a fucking awesome exhibition!! And that's not me saying that alone, overwhelmingly people have loved the show and it's had all around positive critical review. 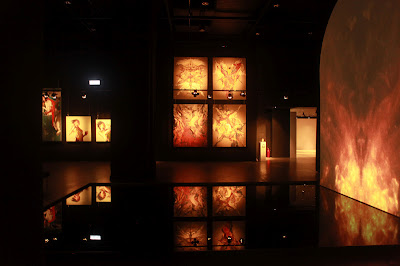 Me, Doug and Emma Richardson

It's an unusual show as it mixes artists from all kinds of odd backgrounds, some of whom really blur the distinction between art, design, music, film, etc. But they all work together very well in the space whether it's 3D's work (from the band Massive Attack) or Huang Rui (leading political contemporary artist from Beijing). There's a beautiful rhythm from piece to piece. Hopefully James Lavelle and I did a good job of curating as we are certainly not from a professional background in such things. We curated from our hearts as much as anything else. 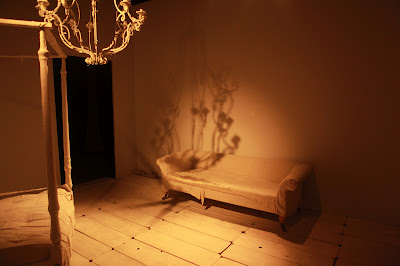 Ten's of thousands of people have been to see the show, it's very encouraging. especially as we had little money for PR and none for advertising. Thankfully, Sinclair Communications stepped in and did a ton of work for that little money and went far over and above their budget in effort and energy. Their example is typical of how things really get done with these kinds of projects. People who actually want to support at no profit, who help out for love. We're always so grateful when people step in in this way, so a big thanks to them and so many others, K+K, Peroni, AXA insurance, of course Swire Properties, AJ Halkes, all our interns, Vicky and Jackie, East Hotel and Royale the shipping company, and the FI team Maggie, Coco, Laura, Leo, Robert, Chris and Peter. Everyone working round the clock for months for little or no money and the Daydreaming guys James and Shiobhan who had to put up with us all being very stressed out! These things are just such a huge team effort. A really positive result, and a show we are very proud of, definitely worth the struggle. Huang Rui with Polly Borland and Jamie Shovlin in the background 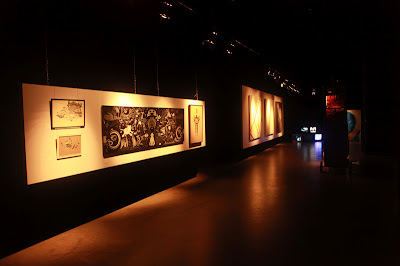 Our boy Prodip Leung On the back of this project I'm now off to LA to pursue a secret project there. Then I have a solo show in Singapore at a great little gallery called Reiss. Then we are planning for the big one. Future Industries have acquired a permanent space. 10,000sq ft in the middle of Central, which we will slowly renovate to be HK's first actual contemporary art museum, ahead of the government and anyone else having a go. It's not huge but it's voice will be loud and as we don't have to answer to a boardroom full of civil servants, you can expect it to be a place of risk and adventure, and not without a good deal of controversy. 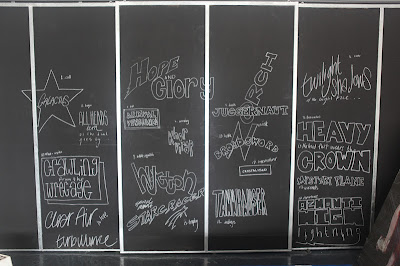 brainstorming on my chalk board at work for a new project

Like many of our larger projects it will be non-profit but we will have an amazing concept store/cafe run by the people behind the brilliant Yardbird, surely one of HK's finest restaurant. This income, along with renting the space out for events, will make the place sustainable so we won't need to beg for support as we normally do! Unless we face an impossible hurdle, we should be open as a rough space early next year with a summer renovation and the proper launch around October 2013.

Interesting that we, with no money or power, may be able to bring HK it's first art museum in a year or so when the government have already been fucking around for 15 years and still it won't be done for at least another 5 years. Fingers crossed and touch wood that we can make it happen....

I wanted to call the museum 700k, as this is the amount the government owes me for my last exhibition (they cut Hope and Glory's funding from 2 million to 1.3million after we had paid all the bills which almost bankrupt us. With no money for a lawyer we couldn't fight them). But the other Future Industries guys decided on my other idea, more positive, calling it 'Kong'. This of course relates to Hong Kong (in English 'fragrant harbour'). The word Kong, or 'harbour', gives a wonderful multi-layered meaning.

Meanwhile I've been developing my paintings with new enthusiasm. After a number of trips to Beijing. I've been working with some well known artists there, photographing them as part of a series of new paintings. It's not so much a series of paintings of artists but of men of a certain attitude, in balance to other works that are of women falling, explosively, through the air. 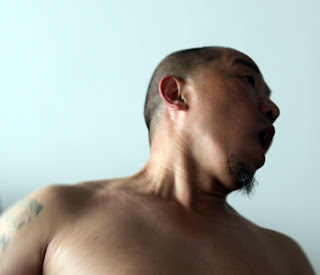 Yang Zhichao in action for my new painting project What's exciting though is the experience of spending time with my brother artists across the border. I've never felt so embraced amongst an energetic, open and relaxed community. Hanging out there, being dragged along to dinners, getting drunk, rolling through artists studios, it's all a lot of fun and very inspiring. The artists there take me seriously and allow me generous access to their spaces, to their lives. I am now planning a number of collaborations with some of these great people.

In HK our art community is more insecure, spread out and less unified and communicative. There's an odd spirit of isolation here. It's hard to get artists to hang out and rare that they come to your exhibition. For Daydreaming With.. I invited about a dozen different HK artists to contribute to Daydreaming. Only 2 came through, Prodip and Wing Shya. Every Chinese or Japanese artist that i invited said yes. I'm sure all had good reason not to get involved but it's a shame nonetheless. Daydreaming was a great opportunity for me as an artist to show my work side by side with some very credible international artists, I had hoped I could help promote other local talent at the same time.

So the summer is approaching and I desperately need a break. Daydreaming has been amazing but so much work. The art fair happened too recently which was an odd experience. I enjoyed getting drunk at the opening and hanging out with my friends at the opening but I don't remember any of the art. I remember feeling that i wouldn't want to see my work hanging amongst thousands of others in the vast trade fair environment but i also felt jealous that i wasn't in it at all! Odd...

It will be good if the art fair under it's new ownership tries to benefit satellite non-commercial projects like ours in the future. We wanted to hand out flyers to promote our project but they said no! Apparently you can't promote your thing unless you're a gallery renting a booth and we can't afford that because we're non-profit.

Anyway, all good. Onwards and upwards to the next art adventure.....