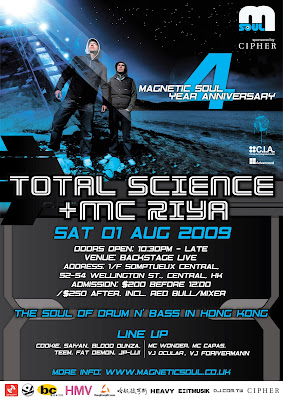 To commemorate our somewhat overdue 4 year anniversary, we are hosting DNB Icons - Total Science and MC Riya for their first time in Hong Kong! With the support from all Magnetic Soul DJs plus MC Wonder, MC Capas, VJ Ocular and VJ Forivermann.

With four albums under their belts, countless dancefloor anthems to their many names, and 17 years experience, it's hard to sum up what Total Science is all about in just a few lines. Total Science (Paul Smith aka spinback and Jason Greenhalgh aka Q Project) is a living legend. They are two of the most prolific producers within the drum & bass movement, being responsible for what is widely considered the biggest, baddest, most devastating jungle anthem of all time: Champion Sound! Total science producing top class music that was desired by everyone. C.I.A and Advanced witnessed the release of an array of tracks from talented producers such as Juju's 'Mojohand/Nomad', Calibre & Zero Tolerance's 'Diamonds and Pearls' and State of Mind's 'State of Mind Experience:Chapter 1/2 whilst Q-Project's 'Ask Not' and Total Science's 'Greatest thing' stormed their way through the UK dance charts. Their album single 'Never Had a Dream' reaching Number 1 in the UK Dance charts and a host of tracks from it being played by the likes of Hype, Fabio, Golde, Zane Lowe, Ronnie herel and Trevor Nelson.