In the heat of working so hard to get the FISTFUL OF BLOOD film up and running I almost forgot how many years it's been since I worked with Kevin Eastman and why I have so much respect for him as a creator and a friend.  Back in 1999-2000 before THE ART ASYLUM  was  manufacturing it's designs solo I was forming alliances with other companies that couldn't afford us as partners on special projects. I would get full creative control and the other company would act as the manufacturer and deal with all other costs. ART ASYLUM  had enough press and followers at that point that there was a monetary value in addition to our design aesthetic. The KISS 24 " DESTROYER/ LOVE GUN projects had really put us on the map and then over the course of the next 2 years we partnered with Toynami on Space Ghost as well as Elfquest , Krofft Superstars  and Ozzy Osbourne but despite the rush of working directly on creative with so many artists and celebrities I had grown up with - the HEAVY METAL F.A.K.K. 2  project with Kevin Eastman was the best experience. 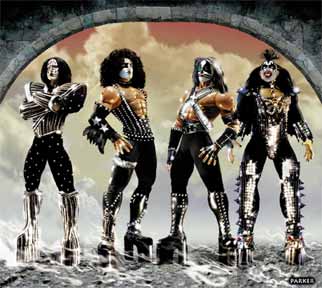 One of the first good friends I met when I first flew out to Los Angeles in my early 20's was Russell Binder. Russell was working with his step dad Jay representing artists, films and original properties in general. I got a call from Russell that he was representing HEAVY METAL 2000  and he wanted me to handle most of the art but we weren't set up to manufacture at that point . He had offers on the table from a few companies but he still wanted me involved. He asked me to fly out to LA that week and meet with Kevin Eastman at his house to discuss the project.I was still struggling with a crew of about 12 artists in Brooklyn in a 6 thousand square foot studio that I was in debt up to my throat to pay for and this looked to not only be a chance to meet Kevin ( who was a legend to me ) but be involved with a high profile film that could help us get to the next level. Not to mention the follow up to HEAVY METAL the movie that had changed my life when I saw it in the theatre when I was 12. I  couldn't believe that so many cool characters, rock and roll, sex and violence could be up on the screen animated without someone breaking into some lame ass dance routine! The American market still doesn't embrace subculture animation at box office by and large to this day. Almost 30 years later!

Kevin was in the press a lot for this and that during the years that followed his creation of NINJA TURTLES. He bought the Bat mobile from the first Tim Burton BATMAN, opened a comic art museum in Massachusetts and among other newsworthy events he had acquired HEAVY METAL magazine. "THE" HEAVY METAL magazine. I didn't need to check my schedule to see if anything else was more important. I got a ticket , copied out directions to his crib in Beverly Hills and got my ass over there to discuss the film the next day. Russell Binder told me that we'd get along and Kevin was a cool dude in general but I was pleased to find he was much more than that. Not that anyone in the arts who's had to struggle should need to learn that being an asshole once you've managed to secure a certain level of fame is a sign of major insecurity as well as a recipe to stunt your creative growth but if ever you wanted to meet a role model for someone who has incredible talent and remembers where they came from.......it's Kevin Eastman. I arrived at Kev's place where he lived with his ex-wife, Penthouse pet , queen of the B movie stars JULIE STRAIN who was the lead of this upcoming film. Then titled Heavy Metal 2000 - as that was it's original release date. The house was covered in original artwork from Simon Bisleyand a bunch of other artists I know and loved. A great deal of this body of work were paintings of Julie for various projects and Julie was in the back yard taking pictures of a mess of naked porno stars in the pool. All of which I had to meet with a straight face and carry on a conversation with. I kept eye contact during most of it and with absolute control -mind, body and spirit managed to not accept the request to get in the pool. Kev and I went back inside to review the projects and I remember mumbling " You guys do this every day here ? Can I just stay ? " I knew I had seen most of the girls somewhere and he refreshed my memory. None of it was on the Disney channel. to be continued...Peace and LoveD

Patrick Lee
woah, crazy story!!! glad he is so cool. ya, it's the best when someone that blows up doesn't have an ego that blows up too...
over 11 years ago

Digger T Mesch
Honestly - A lot of the guys you meet that make it in the comic book world are abusive to their fans and it makes me sick. John Byrne - biggest cock in the world among many. II felt so privileged to have anyone pay attention to our work I spent as much time as I could with everyone when we did portfolio review or signing ,whatever! That's why your there right ? To share with other creatives and fans.
over 11 years ago

Colleen Hamson
That is soooooooooooo cool! I really like what you wrote about people who make it not forgetting where they came from.....Its so true. I also like what you commented here. That is why people do what ever it is they do, regardless of what it is.......the sad thing is its not just the &quot;entertainment industry&quot; that forgets all this, its people from all areas in life.
over 11 years ago