"Some people come to [CND] boot-camp who have been doing nails for 20 years and they think 'Oh, it's going to be a breeze,' but that's really not the case,"prefaced CND International Education Manager and Fashion Week Team Lead Roxanne Valinoti.

Looking nervously at the tools in front of me, I focused on not grabbing on to my head to stop the spinning in my brain.

Aside from a brief stint assisting my aunt at her nail salon during a sidewalk promotion in my teen years, and the occasional emergency model nail situations during a shoot, I have never done nails in a professional situation. I have also never had the burning desire to dedicate hours of my time to creating the perfect crystal placements on my thumbnail or painting tiny cat designs on my finger-tips for the sake of beauty blogging-- as so many of my fellow beauty addicts do so well.

But I received the great honor of a special invitation to visit CND's fashion week design lab, and so there I was. Sipping a hot tea, surrounded by little bottles of polish, glitter, and tiny sponges, orange sticks, and what I can only describe as an acrylic nail on a stick.

Only the top level artists from CND's global artistry team are called upon to work on CND's New York Fashion Week collaborations.

For FW 2014, CND's fabled "A-team" created Catwoman themed nails for The Blond's runway show over the course of a week inside a re-purposedpenthouse suite at the Thompson Hotel LES. 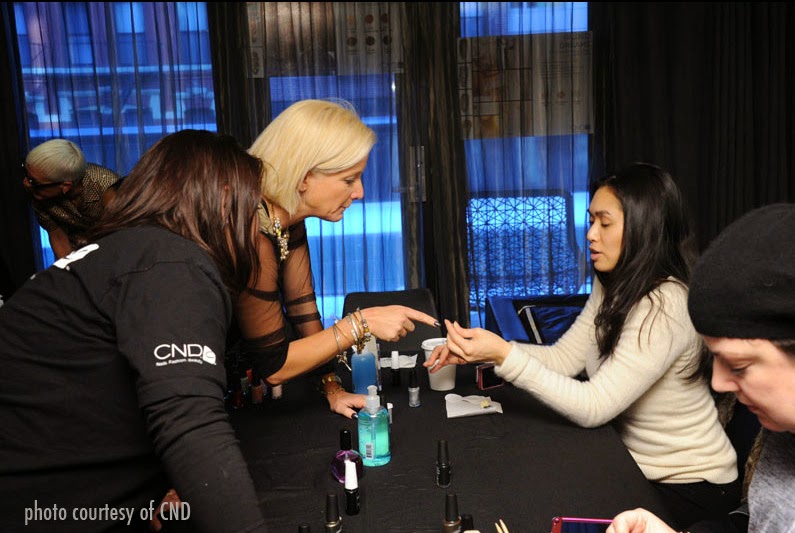 As a guest of CND, I got a sneak peek at their fantastic creations– nail art so amazing, that even Phillipe and David Blond paused to ask "Is that even possible?"

Imagine bejeweled needle fingertips that morph into a web of knitted yarn, which also happens to be the dress that that model Anna Vanravenstein is knitting herself into as she swirls down the runway. Or, what looks like the overflowing clumps of gold chain and jewels that cartoon jewel thieves are clutching as they escape through the rear window, except they are actually an extension of the Catburgler-suited model's fingers as she slinks down the catwalk with the spoils of her night on the town. And, Phillipe's favorite: chic sparkling hinged magnetic cat claws which give a satisfying click as they flip into place with a quick flick of the wrist.

More amazing than seeing the almost finished product, was learning about the methods in which the nails are created.

I was most blown away by the more sculptural designs. The nails with extra extensions sometimes involve some kind of base shape, which the artists build on-- like actual knitting needles for the knitted yarn design. However, most are formed primarily by a technique which CND Global Education Manager Kristina Estabrooks refers to as liquid and powder. Liquid and powder is exactly what it sounds like: nail artists mix a liquid monomer with a powder polymer, to form thick gel like substance, which is then sculpted into something like, say, a miniature AK-47 or a tiny, grinning hand-grenade. After the preview, CND Co-founder Jan Arnold, invited the group downstairs to try our hands at some of the techniques that the A-team uses.

My takeaway from this whole experience? I was painting my nails incorrectly all along. Thank you CND.