“When was the first time you did makeup?”People ask me, .For some reason, I didn’t have sharp memories of it. Years of working in the industry seem to have rolled in like the marine layer; the fog obstructing my ability to connect with the moment I began my career.I do remember the first time I played with makeup, however.When I was about 4, I loved to watch PBS. I’d watch hours of and , but none of those programs made their mark quite like Bob Ross. If you don’t remember (or if you are too young to remember), Ross was the fluffy haired painter who populated canvas upon canvas with bubbling brooks and "happy" trees.In the center of the house I grew up in, was a lovely white brick fireplace. As it turns out, that was the most white space that my 4 year-old-self could reach easily. One afternoon, on my young aunt’s watch, I commandeered some color cosmetics and proceeded to create my own rendition of Mr. Ross’s jolly forests on my mother’s alabaster brick with a bottle of Cover Girl foundation and some cherry red nail polish.  25 years later, when my parents sold their first home and moved out, the legacy of my handiwork was still stained into the mantle.When people ask me, this is the story that always comes to mind– at least, until recently.I had a discussion with a colleague last week.I respect the business minded Instagrammers and Youtubers who have spun their social media fame into amazing careers, but there is a distinct difference between Pat McGrath, and that gal who posts videos of makeup looks on herself. This is a topic that comes to surface often with the professional makeup artists in New York City.She said,” When the new students come in (to Make Up For Ever Academy) they have no connection to the artists that we (as professionals) think of, when we think of makeup artistry.”It’s true. The makeup artists who design the character makeup for movies; the masterminds that gave rise to Chanel’s most recent runway look; the Billy Bs, the Dick Pages, the V. Neils– they have minimal visibility in this universe ruled by the Insta-gurus.Today, it’s more likely that it’s the Michelle Phans of the internet who have inspired so many young aspiring artists to pursue careers in makeup, not the Gucci Westmans.I say this without judgment. I have a YouTube channel myself (through which I hope to inspire). It’s a sign of the times. Now, because of the accessibility of makeup “education,” opportunity in the beauty industry is riper than ever, and proliferating at quantum speed.But, when I started out, there was no Instagram. There was no YouTube.When I was growing up, hiring a makeup artist was not exactly something regular people did for prom or even weddings.  Makeup artist was not really a career option, unless you wanted to be an Avon lady or work at a mall counter.It’s truly a wonder that I found myself at The Makeup Show LA standing in front of a big blank poster where I wrote this: 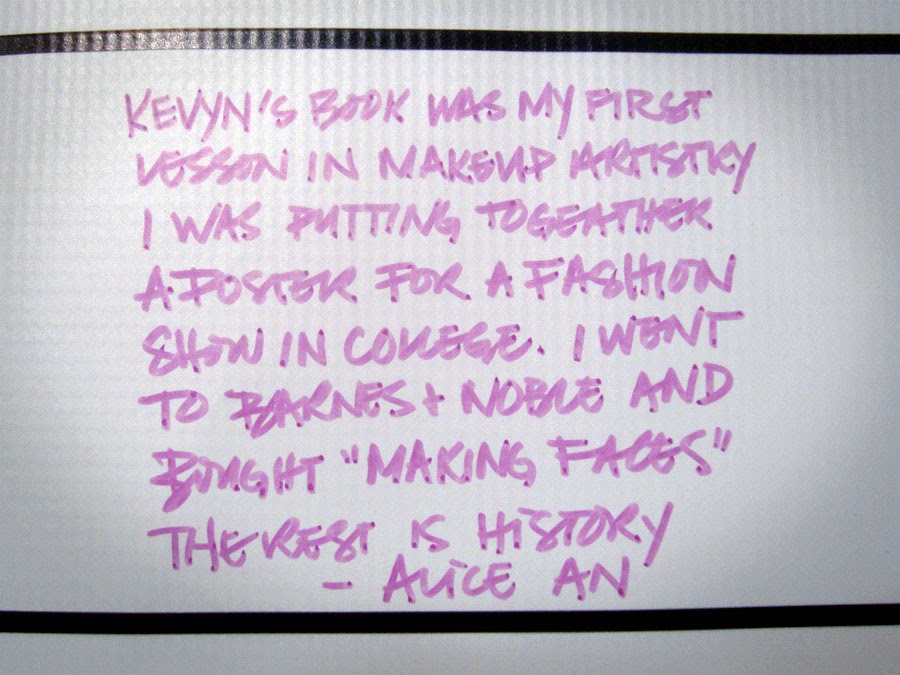 My response to how Kevyn Aucoin has touched my life.In 1998, I was working on a fashion show in college. For student fashion shows, we had a local salon come in and do the makeup. But, this was not something that could be arranged for the advertising of the show. So, I went to the bookstore and purchased by Kevyn Aucoin.  The photo shoot for that poster was officially the first time I did makeup.