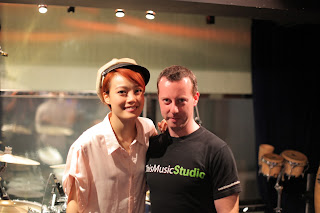 I've been very lucky in these past few years to be able to work with some really talented people across very exciting industries like music, film and TV. One of the main people I've cooperated with over this time period is my old friend and music producer extra-ordinaire Kelvin Avon also known by his producer name Afreex. Kelvin is a double platinum selling music producer in the UK, having sold over 2 million albums in total across his various projects there and has also had top hits in places as diverse as Russia, Turkey, Germany, France and Sweden. Most recently he has been working out of Hong Kong over the last 3 years and that is how we got the opportunity to work together.

This is a pic of Kelvin with one of his Platinum selling albums produced for the UK band N'Dubz: 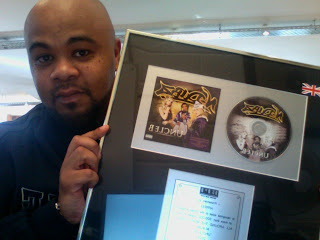 You can also check out his website and blog here:  AfreexSince Kelvin arrived in Hong Kong, we have had the chance to work together with many different well known Asian stars including: Sandy Lam ( 林憶蓮), Van Ness Wu ( 吳建豪),  Jun Kung ( 恭碩良), MC Jin ( 歐陽靖), Hanjin Tan ( 陳奐仁), Race Wong ( 黃婉伶), Rosanne Wong ( 黃婉君), Michael Wong ( 王敏德) and many others. Although I was not directly involved in Kelvin's production and recording of the song Mayfly (蜉蝣) for Joey Yung (容祖兒) he kindly invited me along to sit in on the recording session at This Music Studio. The song was a great success and reached no.1 on the RTHK Radio 2 charts! Although it was not originally intended to be a "plug song" as it was the last album to be added to the album and the 4 plug songs had already been chosen, but because demand from the fans was so strong EEG decided to shoot a music video to the song and put it out in Karaoke's around Hong Kong. The video they shot turned out very well and you can check it out here:

Mathew Blaize
i'm insanely Jealous that you got to meet Joey Yung, absolutely love her music. Mat
almost 7 years ago