Alatas crane services worldwide is a large multi-national company that supplies crane parts and crane services from 8 different offices across the globe. This includes repairs of crane motors, pumps, winches and gearboxes at their hydraulic workshops. I was introduced to Alatas by my good friend Chris Wright who has a strong background in corporate video though he works primarily in recruitment now. At that moment the Alatas Hong Kong team were looking to put together a video that would give a good showcasing of their hydraulic workshop and it's services, especially focussing on their crane motor repairs.One of the challenges of this project was that engineering in general and the servicing of cranes in specific, is not generally considered a very exciting topic, but it was very important to Alatas that we did not produce the sort of documentary style voice-over led video that is common among across the entire engineering industry. Rather they wanted something short, attractive and fast moving that would at the same time give a very clear understanding of all their services and key points of quality to even a person unfamiliar with their industry casually watching the video. Obviously hitting both of these aims simultaneously meant we had our work cut out for us. Luckily we were helped by the fact that they have a beautiful workshop which is kept in immaculate condition, as you can see from the photos below: 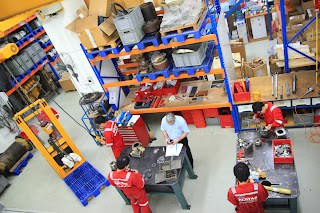 In any case we decided to go for it full throttle and set about shooting a relatively fast-paced video of the journey of a crane motor through the Alatas Hydraulic Workshop. The main reference videos we had to work with (representing some of the best existing videos of a similar nature) were over 20 minutes long, shot in a dull 70's Open University documentary style and accompanied by lengthy and incredibly boring explanatory voiceovers. We decided to scrap this format entirely and go for a 5 minute long, high energy, music driven video with just a few titles integrated into the scenes to act as extra guidance for what's going on. In general though, I think you can follow the linear voyage of the motor through the workshop from arrival to dismantling, cleaning, repairing, re-assambly and testing without needing to pay attention to the titles.

Well we think we did a pretty good job of taking what is quite far from being the most riveting and exciting subject matter and transforming it into a fairly fast-moving and engaging video, in the process altering the ages old documentary format of engineering videos. Apparently we're not alone in our general regard of ourselves, as over 30,000 engineers from all over the world have watched the video making it one of the most popular videos on the net from the crane repair / hydraulic workshop / hydraulic motor category. Have a look and see what you think: