Lots of goodies in this update. My little film of me as a Harajuku Girl (me above) is up and it only takes 60 seconds to watch. Go to http://www.popoftheday.msn.com and click on "March 8, 2008"or Michael Jackson's face to see my film.

Crying all the Way to the Bank. 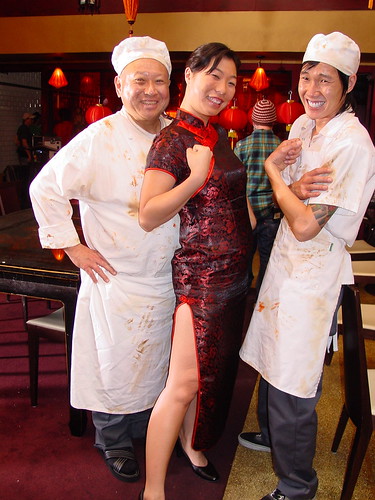 This was a blog entry that I meant to post over the weekend. But here's my story about last Friday night.AURGHH!!!!!!

Was it Ghandi or MLK who said "Practice non-violence?"

I agree for the most part with practicing non-violence but as of last night would like to request an edit...

"Practice non-violence. Except in the case of stupid, dumbass, exploited reality tv stars who are dumber than shit. In which case, it is ok to kick them in the balls repeatedly."

Most Horrible Thought in the World.

The Photoshop sham that is my headshot?

I just had a callback for the commercial I was "scouted" for. In my last post, I described being scouted for the role I was apparently born to play.

The role was a frumpy Chinese waitress with lots of pimples.

And it's been a funny story and all...Read more

I am a natural.

So yesterday, I was in my audition technique class (because I'm Hollywood Wong now, don't you know?) and the class takes place at one of those casting studios which during the day is used for auditions and at night used for classes. And the teacher has us go into the lobby and work on our sides ("sides" are parts of the scrīpts used for the audition).

And I'm just sitting there marking up my sides and these two casting directors suddenly appear in front of me. They start to whisper "Yea...Read more

I found this girl Mandy on VH1. She's like my twin!!! Or at least, I think she's adorable. Like me.

And the MacArthur Genius Award goes to.... Fecal Violence

The Creative Capital deadline is coming up and more than a few artists have been asking me for help. You guys! I don't really know anything about grants. I just apply for a lot of them and some come back to me.

It's nice when people think you have the magic touch. But really, it's just perseverance. I've written many many many grants. And I get turned down for a lot. Grants are like auditions, except there is mo...Read more

"Artist Travels with her Own Contextualizer"

What a trip it's been in Austin. It's been so nice to be such a celeb pants out here. My second show was tonight and the houses have been full! So nice to come to a town and think about the performance and not flyering the town to get people to come. They've done a great job of bringing in an audience for me and letting me be an artist. The people in Austin are such a great audience and it makes me feel excited and...Read more

What a somber name for a site. Death? Yeeks!