"THE FINAL 1" PRESS CON EXPERIENCE: AN INTERVIEW WITH THE INTERVIEWER

Last night on “The Final 1”, the contestants were shown facing various members of the media at a press conference, being interviewed by Rozz on her 987FM radio show, and attending a red carpet event. This writer was privileged to be invited to the press conference, and has deliberately kept the interviews in this article as raw as possible, so that you can see for yourself how they handled the interview questions.

SO WHAT WAS IT LIKE BEING THERE IN THE FLESH?

It was a hazy afternoon when I made my way down to ME@OUE to meet what was then the Top 11 contestants of “The Final 1” competition. I wasn’t really sure what to expect, seeing as in all likelihood, they were all new to this whole game of meeting the press and being interviewed. Just as they were probably wondering what questions they might have to deal with that day, I was wondering what kind of answers I might expect from this bunch. The press conference began with Rozz from 987FM introducing everyone present to the Top 11 - Debbi, Farisha, Faith, Gail, Glen, Hashy, Jean, Louisa, Meryl, Shaun & Yuresh – and giving us a quick glimpse into each of the 11 personalities. 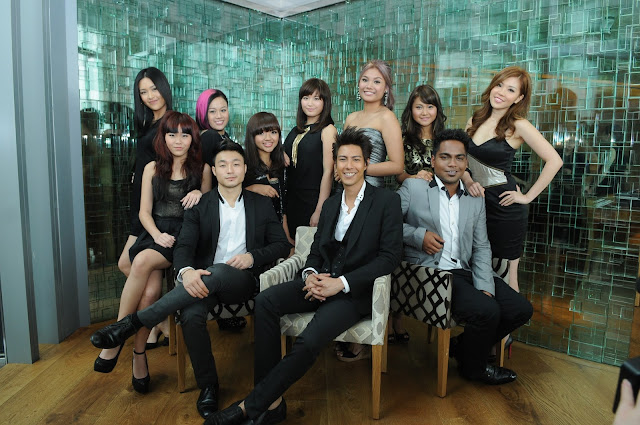 The Top 11 contestants from "The Final 1" (Pic: Mediacorp Channel 5) Next, members of the media took turns interviewing the contestants. I was paired with a writer from The New Paper, and we were given 15-20 minutes with each group of contestants. I had prepared a fixed list of questions for them, looking to see how each of them would answer the same set of questions.

WHO DID YOU INTERVIEW FIRST & WHAT DID THEY SAY? Our first group included Shaun, Hashy, Louisa & Glen... they managed to answer 5 of the questions I had prepared. 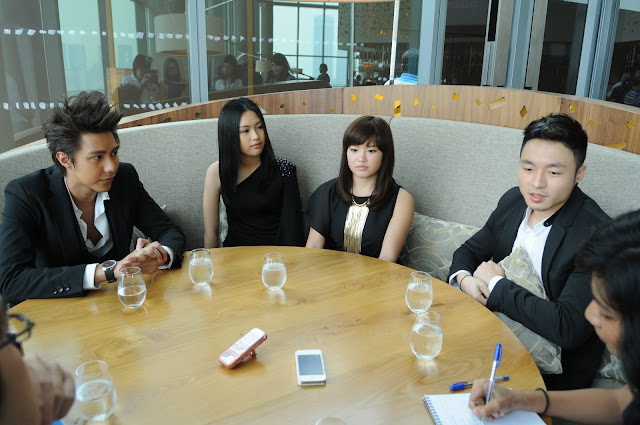 Shaun, Hashy, Louisa & Glen in the hot seat! (Pic: Mediacorp Channel 5) Q: What is your most memorable experience so far, being in “The Final 1”?

Shaun: I guess for me, it’s getting into the Top 11, ‘cos I didn’t expect anything like that to happen. I was hoping to get into the remaining 2, and as they announced both Hashy and Yuresh, I was like “Oh OK, I’m going home to sleep, and I’m going back to work tomorrow”, and then the whole twist came, so I think that was probably the most memorable for me. Hashy: The most memorable would be I thought that I was going to be sent home in the Top 20 round, but in the end, I managed to perform well for the Wild Card round, and that really was the most memorable, apart from the fact that when I was in the Top 40, I got picked by all 3 judges.

Louisa: Well, I guess the most memorable thing for me in this competition is getting to know all these people, and also like what Hashy said, being picked by the 3 judges in the Top 40 round. I think from then, I was feeling very blessed already. Glen: I think my very existence in the Top 11 is quite a remarkable experience already, ‘cos you don’t expect things like this to happen to you. And like, with the amount of effort you put in, it’s just special lah! It’s how you actually dedicate that amount of time and effort for this kind of thing. It’s a learning experience. Q: Apart from yourself, who do you think will be “The Final 1”, and why? Louisa: I’m actually hoping, and I believe so, that Yuresh should be the final 1, because I think he’s very deserving. I’m not saying that you guys are not, but you know, because I’m always very touched when he sings, like we all are, because we can always feel his sincerity, and I think he’s an amazing musician. Although the other 10 are very deserving, that’s what I feel, and that’s why we’re all here in the first place. But I feel that Yuresh is the most deserving person. I’m really in love with his music.

Shaun: I think I would agree with Louisa as well. ‘Cos when Yuresh sings, he puts so much emotion into the song, that it just blows everyone away, and everybody is just glued to the screen. Louisa: And it’s so effortless. Shaun: And the thing is, we know him off-camera, and he lives music, you know. Everywhere, he’s with his guitar. Hashy: Onstage & offstage he is like that. Louisa: He’s a very humble nice guy. Q: If you could go anywhere in the world to hone your craft and take it to the next level, where would you go, and why? Glen: I guess I would go to the UK. I like the atmosphere there. It’s different from like being in Singapore. The hustle and bustle of the city is always going to be choking you somehow, like in a positive way and in a negative way also. It pushes you to do things, but it’s a bit too forced. But when you’re overseas, and you’re like somewhere else, you kinda like leave Singapore behind, and you start afresh. You can get a new mood altogether, a new vibe. Louisa: I think I would go to Australia or the US, because I have a family in Australia which I’m very close to, and I was in the US for awhile for a competition, so I’m actually really close to these 2 countries. I feel that if you’re comfortable with something, you should go ahead with it, like if you believe in something. Singapore is cool, but honestly, you can’t really go far if you don’t really push yourself and go to the extreme, you know. And I’m actually very blessed to be in this competition and to use this as a platform to improve myself, and I’m sure the rest feel the same way. Shaun: I think for me personally, it doesn’t quite matter which country it is, but I picture a cabin in the woods somewhere, and I would like to share it with a few very close musicians of mine, and just stay there for like 3 to 4 weeks, everyday just waking up to the sun, having a black coffee, and just spending the whole day writing music, exploring yourself, exploring whatever types of music you like, and just creating stuff. That’s always been my dream. Q: If you went on tour overseas, and could only bring one item with you that reminds you of Singapore, what would that be? Shaun: Tons of chicken rice? (he laughs) Probably chili padi lah. Louisa: I would like to bring laksa.

Hashy: I’ll bring laksa too. Shaun: It’s always about the food. Louisa: Yeah, it’s always about the food. Singapore food is amazing! It’s like where can you find such… Hashy: …diverse flavours. Louisa: Yah! Glen: I guess I would bring my guitar along. If you asked me to bring one item, I’ll bring my guitar along, because there are a lot of things you can do on a guitar to remind you of certain things. There are certain songs that mean certain things. So I guess I’d still bring my guitar. Hashy: I’ll still bring my laksa. Louisa: Yeah, I’ll still bring laksa. Other than our instruments, I think food is still very important. Q: Who would you want to collaborate most in your music, and why? Louisa: Can I say first? I’m very excited. I wanna collaborate with One Direction. I’m sorry, a girl’s gotta do what a girl’s gotta do! Because honestly speaking, not everyone likes their music, but I do. They’re awesome! Shaun: For me, it would have to be Stephan Jenkins, singer-songwriter from Third Eye Blind. I’ve listened to his music, this one album, ever since I was in secondary school, and I see him as a poet, who puts poetry to music. The way he writes his lyrics and all that, it’s awesome, and I feel like it’s beautiful, and at the same time, he’s got such a beautiful way of putting sadness, loneliness, a lot of feelings into it, so I would really like to write a song with him, if ever there was a chance. Yup. Hashy: I really love Feist. But if I had to collaborate with a singer, I would collaborate with Yuna, she’s Malaysian, and I think she’s quite close to Singapore for me to collaborate with. Glen: I guess I really like Kodaline and I feel like I really wanna dig deep into their brain and find out how they actually do something like that, but I guess it wouldn’t really be realistic. My second best in line to work with would be Yuresh.  WHO DID YOU INTERVIEW NEXT & WHAT DID THEY SAY?

Our second group included Yuresh, Jean & Meryl… they managed to answer 3 of the questions I had prepared. 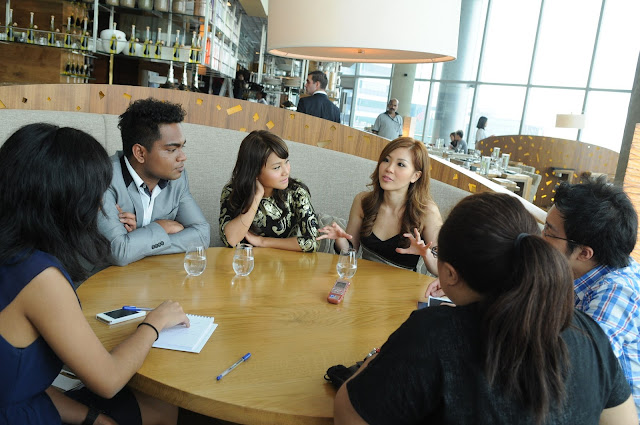 Yuresh, Jean & Meryl facing the media (Pic: Mediacorp Channel 5) Q: What is your most memorable experience so far, being in “The Final 1”?

Yuresh: For me, the most memorable experience up till now would be the first round in the Top 60, ‘cos that was the first time we actually really got to hear everybody sing, and being the typical Singaporean that I am, before I joined this competition, my image of a Singaporean vocalist wasn’t that high. You know, I feel bad about saying that now, but it’s because I wasn’t really exposed much to local talents, so being in the competition, in the Top 60 round, I was sitting there, watching everybody sing, and at least 55 out of the 60 were good enough in my books to be in the Top 40, so it was really eye-opening for me. Jean: I think for me, the most memorable experience would be the Top 60 as well. I am somebody who is quite scared to get too close to people, because it’s a competition, and I am quite emotionally invested in people, so I would say that t