I FELL IN LOVE WITH "THAT GIRL IN PINAFORE" 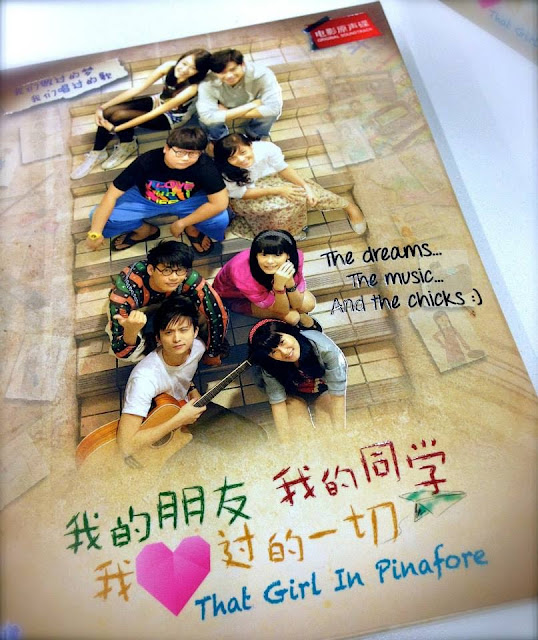 This article was soooo hard for me to write for so many reasons. The main reason being that love is blind. And I fell in love with this Singaporean movie called"That Girl In Pinafore". But I wanted to write an article that was clear. So how??

So OK lah, I’ll try to say what I can say, and just tell you how I feel. Having been a girl in pinafore myself for 10 years of my life in school, the characters and situations in this movie were all very familiar to me. If you disregard the fact that this is a period movie set in Singapore in the 1990s, everything else seems eerily familiar, if you grew up in Singapore. So whether you’re a teenager now, or were a teenager in 1993, this movie will still hit home for you. Among all the movies that director Chai Yee Wei has made, he says that this movie is the one that is closest to his heart, it is the movie he most wanted to make, and this movie features things that he is most familiar with, having grown up in 1990s Singapore himself. Yes, there have been coming of age movies set in Singapore before, like “The Teenage Textbook Movie”. And there have been slice of life movies set in Singapore before, like “Army Daze” and “Ah Boys To Men”, which are in a way, coming of age movies themselves. But there has been nothing as authentic or as complex as “That Girl In Pinafore”. The characters could be our neighbourhood friends, our classmates, our buddies, or our BFFs. They were very much like the people we grew up with. By the end of the movie, I found that I really liked these people! And I think it helped that the cast consisted of new faces, as it definitely made them more relatable. I was impressed with the attention to detail that gave this movie such an authentic feel. Things like the use of pagers, instead of smartphones; calling in to dedicate songs, instead of using email and social media; and the use of visual effects to ensure that the filming locations still looked like Singapore in the 1990s. It felt like I had ridden a time machine back to 1990s Singapore. One particular location featured in this movie really stood out to me. It wasthe yellow lighthouse at East Coast Park, because my childhood home is right next to East Coast Park, and as a teenager, that’s where I spent my time enjoying barbeques and overnight chalet stays during the weekends and school holidays with my friends. So when I saw that yellow lighthouse, it really brought back some fond memories. OK, wait wait… can’t talk about this movie without mentioning the music that was in it! The music was authentically 1990s xinyao. So what is xinyao? It is made in Singapore music, and most people would typically associate it with the popular folk-sounding Chinese music scene in 1990s Singapore. But really, “xinyao” is the shorter expression for “xin jia buo nian qing ren chuang zhao de ge yao”, which translates to ”songs composed by young Singaporeans”. When I asked the director what his interpretation of xinyao is, he said that he prefers to think of xinyao in broader terms, referring to any popular song composed by a Singaporean. And since Singapore is a multi-cultural and multi-lingual country, this means that it could also include popular songs composed by Singaporeans in English, Malay and Tamil. After all, Singapore is Singapore, regardless of race, language and religion, right? Well, guess what? The soundtrack for this movie was#1 on iTunes Singapore… so why was it such a hit? Firstly, the songs in the soundtrack included popular songs from the 1990s xinyao movement. Secondly, these songs were not just re-recorded and put together in an album. They were actually re-worked and updated, remixed and covered by the cast members themselves, who can all sing and play musical instruments in real life. This makes the soundtrack somewhat like a local version of a “Glee” soundtrack. Middle-aged Singaporeans who grew up in the 1990s will recognize the classic favourites they grew up with, while today’s young Singaporeans will enjoy the hip new re-makes of these songs. Thirdly, in line with the director’s interpretation of what he considers to be xinyao, some non-Chinese songs have also been included like“My One & Only”and “Di Tanjong Katong”. (I have to say that my personal favourite on this soundtrack is Kevin Mathews’ “My One & Only”, because I grew up listening to that song.) Well, folks! This is probably gonna be your last chance to see “That Girl In Pinafore” before it’s run at the cinema ends! So why not call up your best friend, your ex-classmates, your army buddies, your pals from the void deck, or even that girl in pinafore, and go book tickets to watch “That Girl In Pinafore” at theGolden Village cinemaor theFilmGarde cinemathat is closest to you tonight! For our friends reading this overseas, I hear folks in Shanghai have already seen it, and the director has plans to screen this movie in Malaysia and Taiwan too! So keep your fingers crossed... or if you really can't wait, go bug your local cinema operator to screen this movie in a cinema near you